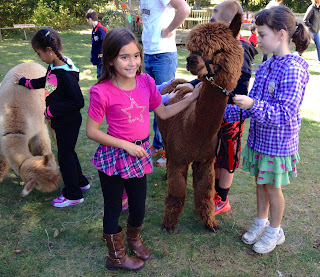 Atticus Rex and Mozart of Island Alpaca were met by a number of enthusiastic party-goers on this beautiful crisp fall day! There were games of all kinds; a hay bale obstacle course, "guess the pumpkin’s weight", bowling with squash, craft-works, delicious fall treats and of course, Island Alpaca!  Many Thanks to Caleb and David Hannon for bringing them to this special event, and to Anna Marie D'Addarie and Andrea Figaratto for their help to organize this special day! 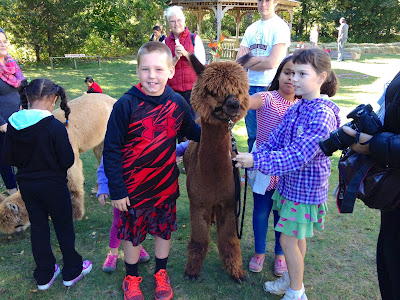 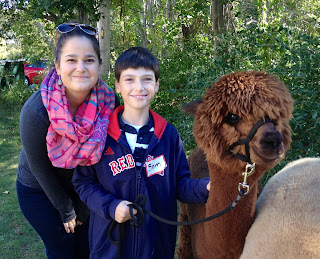 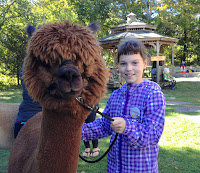 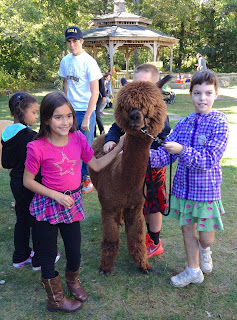 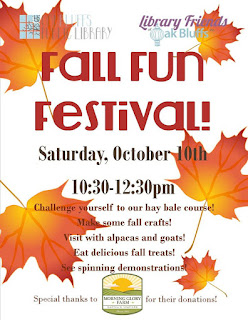 Posted by Island Alpaca Co. of Martha's Vineyard at 11:34 AM No comments: 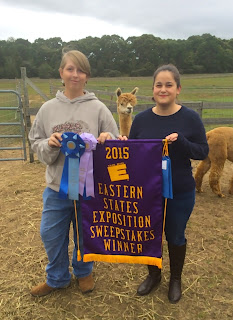 This Friday, October 2, Ashleigh Plante and Andrea Figaratto of Island Alpaca Farm traveled with three Island alpaca to West Springfield to participate in the three-day alpaca event at the 99th annual Eastern States Exposition. They were among many alpaca breeders at the event, and brought home the coveted prize: the Eastern States Exhibition Sweepstakes Banner.
The Alpaca Show usually draws over 200 alpacas; this year, Island Alpaca not only won the “Reserve Champion” award, but also garnered a new prize, the Sweepstakes Champion. This goes to the exhibitors earning the greatest number of total points in the Alpaca Show, based on ribbons awarded for each alpaca, their fleece, and fiber products.
Also awarded was a Blue Ribbon and Reserve Championship for their alpaca Estrada’s Hot Shot, and five additional blue ribbons, including for the category of Breeders Best Group of Three! Many Kudo's to Ashleigh and Andrea for their hard-work and big awards!

Posted by Island Alpaca Co. of Martha's Vineyard at 4:25 PM No comments: