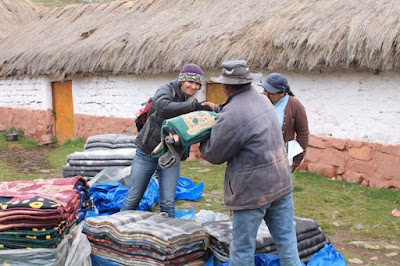 The blanket project was in response to the very cold temperatures in the highlands over the past several years that contribute to both animal and human mortality, especially among the young. Two remote and very high villages, one at 16,500 feet elevation, were selected for distribution. These are some of the highest human habitation sites in the Andes and being above the agricultural zone are solely dependent on their camelid products. The blanket distribution was a great success, and we have Author Morris and many others to thank!140 high quality Peruvian blankets were gratefully received by community members who arrived at the village meeting house from miles away. In the background were patches of snow and above these the receding permanent snow fields. Pumas, largely absent below near the town, come out of the hills and prey on the alpacas and vicuña, and during the birthing season condors are reported to take newborns. Clearly these folks are living on the edge as climate change is imposing increasingly unpredictable conditions on their pastoral way of life. Thanks to everyone who supported this campaign and helped spread a little warmth where the need is great!

Recently Island Alpaca had the pleasure of a visit by Arthur E. Morris, a big supporter of the Nunoa Blanket project! Arthur traveled to Nunoa as part of the PSU "Human Performance Laboratory" department research funded by the U.S. Olympic Committee and Fed Gov. They spent parts of most of our summer of 1965 in Peru. Part of the research was to study the effects of altitude on athletes but we also participated in studies conducted with the PSU anthropology department and Brooke Thomas was, he believes, performing graduate study work and that resulted in our meeting in Cusco and Nunoa! Nice that they are still in touch and together support such a great cause.

In case you did not know.. Some of the goals of the Nunoa Project:
....to make a positive difference in the lives of herders and townspeople of the southern Peruvian highlands ...to address immediate needs through humanitarian aid and veterinary support for the animals in the region.  ...to establish self sustaining programs in the areas of support for herding families and veterinary assistance for livestock in the Department of Puño region.
To learn more: Visit: http://nunoaproject.org/


Posted by Island Alpaca Co. of Martha's Vineyard at 2:31 PM